More fun on the piste

We love playing pétanque and one of our favourite terrains when in Nice is among the olive trees at Cimiez. When in England we play pétanque in Brighton on the terrain at the Peace Statue, the home of Brighton and Hove Pétanque Club.

Back in 2009 we were very excited to discover that the final of the major pétanque competition  – the Euro Cup for Clubs –  was taking place in Nice! Trying to find exactly where it was going to be held needed dedicated detective work as amazingly no-one at the tourist information had heard anything about this major competition. We eventually discovered the venue from the local newspaper,  Nice Matin. It was to be held in the huge boulodrome near Palais Nikaia on Rue de Grenoble. 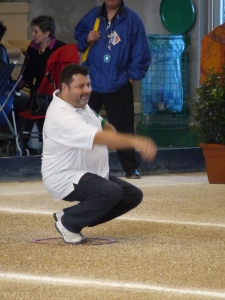 We found our way there from the city by bus. Fortunately the bus-stop was fairly close to the boulodrome – unfortunately in December 2009 it absolutely poured down so we arrived dripping wet – being English we were used to this, so no problem.

Naturally we supported le Duc from Nice and were very excited to see Philippe Quantais, Philippe Suchaud, Henri Lacroix, Pascal Milei and Simon Cortes playing – and winning the championship too!

Our luck continued the following year as the final was once again held in Nice – the venue being that of the previous year’s winning team. This time we were better prepared and arrived in time to have a very good meal at a restaurant over the road from the boulodrome.

On this occasion Pascal Milei wasn’t playing and his place was taken by Ludovic Montoro, son of le Duc’s coach Alain Montoro. The crowd being mostly from Nice were vociferous in their support and I loved hearing the woman next to me shouted “Allez Fi-Fi” whenever Philippe Suchaud was about to play.The whole team played well. It was great to see  Quintais pointing and shooting superbly – including shooting the jack on several occasions – and to know that Le Duc were the winners again!

Le Duc
winners of the Euro Cup for Clubs 2010